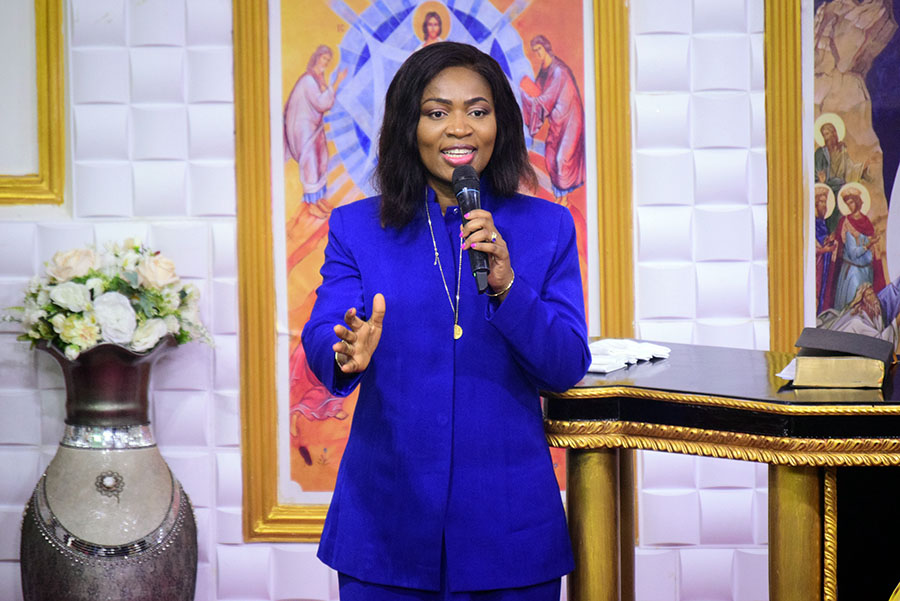 If you receive a gift for what it is, then, the purpose is attained. If there is no notion of receiving the one sent of God as a gift to convey His message, there will be no proper reception.

He that descended is the same also that ascended up far above all heavens, that he might fill all things. And he gave some apostles; and some, prophets; and some, evangelists; and some, pastors and teachers; for the perfecting of the saints, for the work of the ministry, for the edifying of the body of Christ: till we all come in the unity of the faith, and of the knowledge of the Son of God, unto a perfect man, unto the measure of the stature of the fullness of Christ. – Ephesians 4:10-13

The scandal of particularity is that God wants to bless us. God wants to bless you! That is why the five-fold ministry is there to train believers for the work of service, to build you up to attain the unity of the faith, bringing you to the place where every extra luggage you have about yourself falls off, crucified with Christ, dead and buried. That is why God gave the “domata” offices as gifts – apostles, prophets, evangelists, pastors and teachers. If you receive a gift for what it is, then, the purpose is attained. If there is no notion of receiving the one sent of God as a gift to convey His message, there will be no proper reception. The “domata” ministers are shepherds, those that are to give you words of consolation and direction, sent with the power to catapult you through God’s plan. This reveals how important you are to God. The gift God gave is to prepare you for the work of service (Ephesians 4:12 – Easy English Bible).  If God speaks about us being prepared for the work of service, it means there are benefits. If that benefit for you has been thirty or sixtyfold, it is time for the hundredfold; it’s time for us to attain our full potential.

The hundredfold is the place where we attain the unity of the faith and the knowledge of the Son “unto a perfect man, to the measure of the stature of the fullness of Christ” (Eph. 4:13). Christ descended to the confines of the earth to render captivity captive. He has taken captive everything that could hinder you from moving forward to the hundredfold. We are trained for the work of service because we cannot attain full capacity if we are not in the Lord’s service. The training is thus to make you to be unmovable and steadfastly serving without quitting your rank, in your walk in Christ. Service takes away the extra luggage, every false belief about yourself, for you are crucified with Christ.

Herein is my Father glorified, that ye bear much fruit; so shall ye be my disciples. – John 15:8

The Father is glorified when we bear much fruit. As the fruits you bear cause thanksgiving to arise everywhere, He is exalted. Your Father longs to see you having a hundredfold. In you attaining the full measure of the stature of Christ, He is glorified because the world will see that He truly invested Himself in you. He that descended is the same also that ascended far above all heavens, that He might fill all things (Ephesians 4:10). The term “fill up” is the Greek term “pleroo” and it means to cause to abound, to furnish and supply liberally. This is the description of the one that is trained for the work of service.

It matters to God that you lack nothing but are furnished to the overflow. In His ascension, Christ ascended with you that you may be above all things. He ascended to continue His priestly ministry at the right hand of the Father so that you may be complete, supplied liberally, abounding in everything, have a hundred fold and lack nothing in whatever domain of your life. Your supply glorifies the Father.

The Lord said through Apostle Paul, in his second epistle to the Corinthians, that He supplies seed to the sower (2 Cor. 9:10). The seed that He supplies does not refer to money; He was speaking about Himself. God supplying Himself through the gift He sent is the seed He ministers. This is the liberal supply we have in Christ filling all things.

And it came to pass as he sowed, some fell by the wayside, and the fowls of the air came and devoured it up. And some fell on stony ground, where it had not much earth; and immediately it sprang up, because it had no depth of earth: But when the sun was up, it was scorched; and because it had no root, it withered away. And some fell among thorns, and the thorns grew up, and choked it, and it yielded no fruit. And other fell on good ground, and did yield fruit that sprang up and increased; and brought forth, some thirty, and some sixty, and some an hundred.

The hundredfold harvest is not an assessment of the sower, but of those who receive the seed. When the Word comes, He gives Himself fully. All received the seed, but all did not receive according to the capacity of the gift. The implantation of the seed and the harvest were different. All did not experience the harvest and by implication, not all became sowers as well because they did not have bountiful grain to reinvest in other soils. If you harvest a hundredfold, you will want to sow again to harvest more. Each time you receive the Word, you are receiving what God is. He gives you what He is out of the fullness of Himself. You determine the harvest.

Some received the seed but because they were distracted by the cares of the world, they ended up not having any harvest. Their hearts were choked up with worries. But we are not to fret for nothing. In everything, through prayer and supplication, present your request to God with thanksgiving (Philippians 4:6-7). Another category received the seed but equally had no harvest because they had no root, which speaks of stability in the Church. It is important for you to be grounded and steadfast especially in a place where life is ministered.

Some seed fell on good ground and yielded fruits that increased. However, all did not produce to the capacity of the hundredfold. Some produced thirtyfold, others, sixtyfold. God is concerned about you having the hundredfold because He gives Himself fully in His Word. The hundredfold is the place where each domain of your life works perfectly and is fully supplied with the mercy and grace of God despite the challenges that you may experience.

This article is an extract from Dr. Annie Smith’s message titled “The Hundredfold Harvest”. Order the complete message on www.gcmonlinestore.com